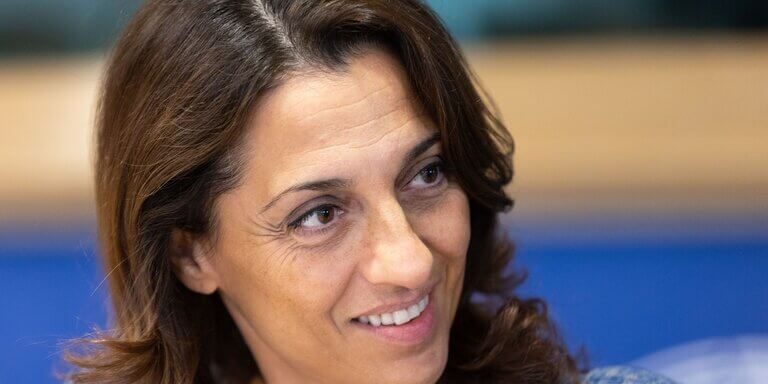 “I feel angry”. She says it with a broken voice, looking down at the ground. “I’m in shock. Seeing everything that is happening, after putting my soul into my work, sometimes negotiating until four in the morning, feeling proud of what you have achieved for the institution you represent, with so many personal sacrifices…”.

Irene Tinagli is disappointed after the corruption scandal broke out this week in the European Parliament, where she plays the role of president of the Economic Affairs committee.

She is disappointed by a certain policy, but not by politics, which has always been her great passion. She was passing through Barcelona, where she had meetings at the Cercle d’Economia and with the family of the European Socialist Party, to which she now belongs. Daughter of two accountants from a town in Tuscany, Irene initially did not want to follow in her parents’ footsteps. But she realized that if she wanted to understand the world, she had to study economics. She went to Milan, to the prestigious Bocconi University, which at that time had a reference figure such as Professor Mario Monti.

She got a scholarship to make the great academic leap to the United States, at the University of Pittsburgh. Between studies and doctorates, she stayed eight years. There she specialized in public economics. Because politics never really left his life. It was time for him to return to Europe, and it was then that she got a place at the Carlos III University of Madrid. She landed in 2009 in Spain “that was on its knees, touched by the crisis.” But she was captivated by the capital, a city where “it is impossible to feel alone” and “where you can end up chatting with a group of ladies you don’t know over a beer in a bar.”

With her partner, an IESE professor, she was laying the foundations for a peaceful life in Madrid when THE call came (in capital letters). Being linked to a think tank that included the executive Luca Cordero di Montezemolo and the future minister Carlo Calenda, Irene Tinagli was presented with the possibility of being a candidate for deputy in the Italian Parliament. She got in the first time. It was the legislature that had Enrico Letta, Matteo Renzi and Paolo Gentiloni as prime ministers. A period in which she understood how difficult it is to move in the web of the palaces of Rome, especially when you do not have godparents or belong to party currents.

When she finished this stage, her life offered her another opportunity: that of going to the European Parliament with the Democratic Party (PD). “I was afraid. I thought that no one would vote for me and that this would damage my reputation. She, on the other hand, swept her, she was the woman who obtained the most votes in northern Italy. In a lightning promotion in Strasbourg, she reached the top of the Economic Affairs committee. A place of extreme relevance, because it is where all the heavyweights of Brussels usually go, from Margrethe Vestager, through Valdis Dombrovskis to Christine Lagarde.

This body is in charge of all the hot community issues, from the stability pact, banking regulations, fiscal issues or monetary policy. “I have learned that if you want to reach a consensus, you have to let go of your ideological banner a bit, until you reach a common position,” she admits.

To follow her political passion, she has had to juggle reconciling with her son, who is barely nine years old. “I have managed to convey to him the sense of responsibility. He has understood that sometimes her mother cannot be with him, because she has made a commitment to some people who have given her their trust and that she cannot fail them”, she confesses with motherly love.

To close, an anecdote. “Once I had to run away from home due to a political emergency and he himself told me: ‘I understand, mom, if the government has fallen, it must be a very important thing.'” As Stendhal wrote, “with passions one never gets bored”.