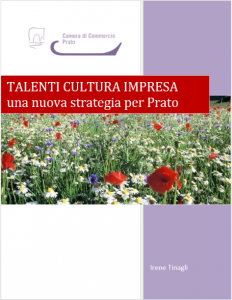 Prato is among the oldest and largest Italian industrial districts. For years, it has prospered thanks to its flourishing textile firms. The ensuing slow decline of the industry has then thrown the city in a deep economic and social crisis. The project, sponsored by the Prato Chamber of Commerce, aimed at rebuilding the city’s social and cultural identity, drawing new development trajectories which could leverage its vast cultural and creative potential. To do that, we have analyzed economic, demographic, social and cultural data, and elaborated analyses and proposals described in the Report: “Talenti, Cultura, Impresa: una nuova strategia per Prato”.